In Year A of the Revised Common Lectionary the Gospel readings for Sundays in Lent include three lengthy episodes from John’s Gospel. They all relate personal encounters with Jesus, through which a deep theological point is revealed. On the third Sunday, Jesus encounters the Samaritan woman at the well. On the fourth, it is the man born blind. On this, the fifth Sunday in Lent, it is the raising of Lazarus from the dead, an encounter not just with an individual, but with the whole household at Bethany – Mary, Martha, Lazarus -- all special friends of Jesus.

In each of these stories there is a miraculous element, and the dramatic nature of the miracle intensifies from one episode to the next. Jesus, somehow, knows the Samaritan woman’s personal history without asking. This impresses her greatly, but it pales in comparison with the miraculous gift of sightedness to a man who had never been able to see. The restoration of Lazarus from death to life is more dramatic still, and the Gospel writer goes into slightly unpleasant detail in order to banish any suggestion that this was mere resuscitation.

In considering miracles like these, it is easy to be deflected into wondering whether they happened quite as they are described, and whether there is some ‘naturalistic’ explanation. This is understandable, given contemporary ways of thinking, but it is of the first importance to see that these are ‘signs’, and not merely ‘wonders’. That is to say, this is one of these occasions when we should remember that ‘actions speak louder than words’. What these miracles have to say -- to everyone -- is more significant than the undoubted benefits they brought to particular individuals.

What do they say? The lessons that surround them give us a clue, especially this week. Ezekiel’s vision of the valley of dry bones into which the Spirit of God breathes life, places Jesus’ raising of Lazarus beyond mere revival and into the context of redemption. Paul’s commentary in Romans invites us, indeed challenges us, to look past physical health and strength. “To set the mind on the flesh is death, but to set the mind on the Spirit is life and peace. . . . If Christ is in you, though the body is dead because of sin, the Spirit is life because of righteousness”. Lazarus’s corrupting body is not the only form of death. Nor is it the worst. Jesus displays God’s creative power in a spectacular act of reversing the normal processes of nature. But the point is not to give Lazarus a few extra years. It is to show that a quite different life-giving transformation is on offer and, paradoxically, to warn us against clinging desperately to this mortal life.
Posted by Christ Church Morningside at 3:09 PM No comments:


The Gospel for this Sunday is a miracle story that turns into a perplexing parable. A man who is literally blind is given sight for the first time in his life. The Pharisees, who are highly suspicious of Jesus, look for ways to discredit this miraculous deed, and at the same time dispel any idea that he might be the Messiah. They first doubt if the man was really blind, and then try to get him to admit that since Jesus committed a sin by healing on the Sabbath, his miracle cure is no reason to put Jesus on a religious pedestal. The man makes a memorable response "I do not know whether he is a sinner. One thing I do know, though I was blind, now I see."

When finally the Pharisees engage with Jesus himself, it appears that the whole episode is not primarily a healing miracle at all, but a parable in action, one about spiritual sight and spiritual blindness. Puzzlingly, Jesus says that those who are blind will be able to see, and that those who can see will prove blind. How are we to understand this? An important clue comes right at the start of the passage. The blind man is not blind because he is a sinner. Though it looks like a curse, his blindness is in reality a very special attribute, since through it Jesus will reveal the works of God. What is revealed is that Jesus is the one true light. That is to say, it is by close attention to the works and words of Jesus, not by scrupulous attention to religious regulations, that we can discern God’s will for us. By refusing to acknowledge this, the sighted Pharisees show themselves to be purblind. By acknowledging it, the blind man shows himself to have insight.

True sightedness about ourselves, the lives we lead, and the world we live in requires light by which to see. Sinfulness flees from the light because it prefers that the truth should remain hidden. The short Epistle reflects this dichotomy and turns it into a choice with which we are confronted. “Christ will shine on you” it roundly declares. For those who want the truth, these words represent a liberating promise. For those engaged in “works of darkness”, these very same words constitute a threat. The choice is clear, and real. We can continue to act according to our own light, and inevitably stumble around in darkness. Or we can subject ourselves to the light of Christ, and gladly embrace the truth that it reveals, however painful or uncomfortable that might be.

Posted by Christ Church Morningside at 11:12 AM No comments:

The Feast of the Annunciation -- March 25th -- is celebrated exactly nine months before the Nativity of Our Lord. It is, we might say, the first feast of Christmas. This brief encounter between girl and angel is pivotal to the Christian religion. It is the point at which God chooses to make His astonishing initiative to humanity depend, yet more astonishingly, upon a human response. Moreover, the mystery is intensified by the fact that the human being in question is a very young woman living in circumstances of exceptional political obscurity and social simplicity. That is why Mary cannot be just like anyone else in the faith of Christians.

The Annunciation is notable for the extent to which it has stimulated artistic creativity. There are hundreds, if not thousands, of paintings of this biblical episode in indefinitely many styles. Mary's hymn of response -- The Magnificat  -- has been set to music by composers in every period. Poets, too, have found themselves driven to verse in the attempt to capture its intriguing 'feel'. 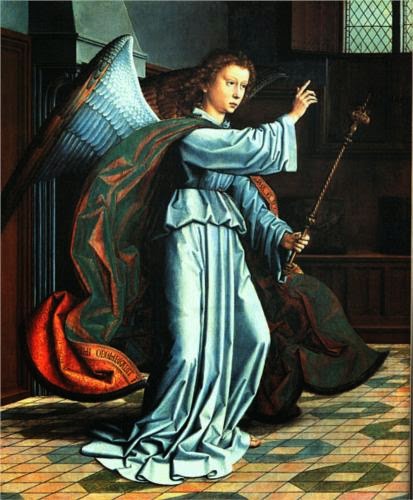 The angel and the girl are met
Earth was the only meeting place.
For the embodied never yet
Travelled beyond the shore of space.
The eternal spirits in freedom go.

See, they have come together, see,
While the destroying minutes flow,
Each reflects the other's face
Till heaven in hers and earth in his
Shine steady there.

He's come to her
From far beyond the farthest star,
Feathered through time. Immediacy
Of strangest strangeness is the bliss
That from their limbs all movement takes. 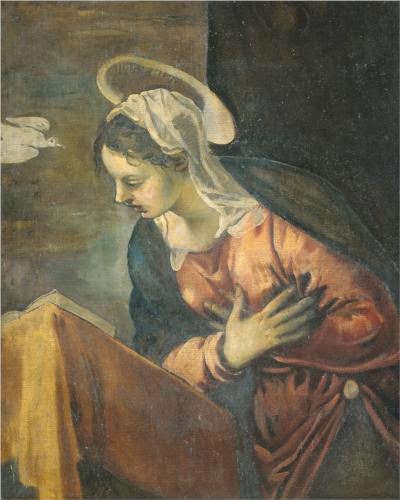 But through the endless afternoon
These neither speak nor movement make.
But stare into their deepening trance
As if their grace would never break.

Pictures
The Annunciation (Study 2) Sorin Dumitresco, Romanian (b. 1946)
Angel of the Annunciation, Gerard David (1506)
Annunciation, Maria, Tintoretto (1594)
Posted by Christ Church Morningside at 10:59 AM No comments: 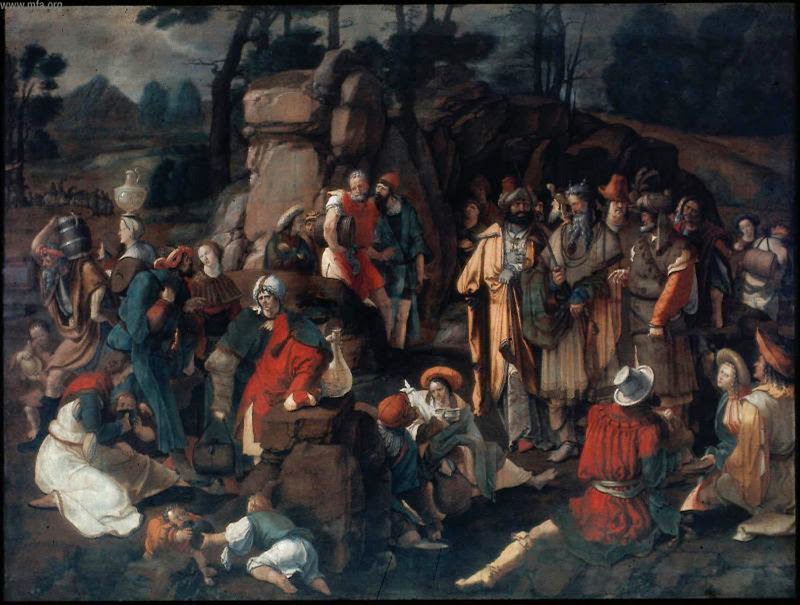 Symbols are indispensable to theology and religion, because often it is only through symbols that we can talk about both the world in which we live, and the reality that transcends it. In the Bible, ‘bread’, ‘water’ and ‘light’ are used symbolically again and again. It is easy to see why. All of them are essential to biological life, and so they readily lend themselves as means by which to point beyond the biological, to the essential elements of spiritual life.

The Old Testament lesson and the Gospel for this week are linked by one of these symbols – water. Moses, tormented by yet more complaining demands on the part of those he has led out of slavery – on this occasion it is “Give us water” -- cries out to God in his frustration. God responds by aligning himself (almost literally) with a miraculous supply of water in the wilderness. “I will be standing there in front of you on the rock at Horeb”, he tells Moses, “Strike the rock, and water will come out of it”. Thereby, the Israelites’ biological need for water is made the means of demonstrating their dependence upon God. 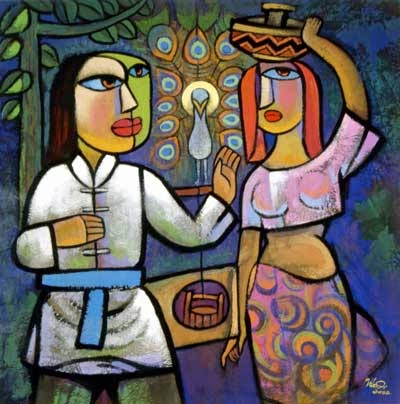 The episode, however, also reveals the weakness and waywardness of the Israelites. They have taken it upon themselves to test God, and this exposes their underlying faithlessness. The Gospel passage offers us an interesting reversal. Here too the symbol of water plays its part, and the need for it is made the means of a test. But it is God in the Person of Jesus who needs water, and the Samaritan woman who is asked to provide it. Being Samaritan, she is not one of the ‘Chosen’ people, but part of a group regarded by Orthodox Jews as renegades.
Nevertheless, she passes the initial test by drawing water from the well. This proves her worthiness to be put to a deeper test. Does she long for ‘living’ water of a different kind, and can she see that Jesus is offering it? The woman is convinced, almost, by the extraordinary insight Jesus shows into her life and character. This gives us a clue to the nature of the ‘eternal life’ to which Jesus refers --  life in God. In the Epistle, St Paul’s description of this life also makes an implicit reference to water. “We have obtained access to this grace in which we stand; and we boast in our hope of sharing the glory of God . . . because God's love has been poured into our hearts through the Holy Spirit that has been given to us”.


Pictures: Moses and the Israelites and the Miracle of Water from the Rock  Lucas van Leyden, 1494-1533 and Jesus and the Samaritan Woman He Qi  Jean and Alexander Heard Divinity Library, Vanderbilt University
Posted by Christ Church Morningside at 4:47 PM No comments: