The traditional color for the Season of Advent is purple. Increasingly, however, blue is used as an alternative, and this reflects a significant change in thinking, a change embodied in the Revised Common Lectionary. In part Advent is like Lent – a penitential season when our thoughts should be focused on the great, but awesome, themes of sin and redemption. In Cranmer’s original Book of Common Prayer, and in the versions that followed for many centuries, the Sunday lessons throughout Advent had the “Last Things” as their unifying theme – death, judgment and the Second Coming of Christ.
In the Revised Common Lectionary, by contrast, on the last Sunday in Advent we switch from death to birth, when the Gospel of the day begins the Christmas story. This is not mere convenience. This year’s Gospel for the second Sunday of Advent demonstrates just how closely the Second Coming and the First are connected. John the Baptist, warns his hearers of judgment in the sternest language -- "You brood of vipers! Who warned you to flee from the wrath to come?” – and he urges them to repent because “the kingdom of God is at hand”. This is the stuff of the Second Coming and of old-style Advent. But then, almost immediately, he turns their attention to the First Coming when he tells them that “one who is more powerful than I is coming after me”.
The fact is, God’s time is not our time. Strictly, in the eternal God there is neither ‘before’ nor ‘after’. Incarnation and Judgment are two sides of a single divine act. The ‘baby in the manger’ is at one and very the same time ‘Christ in his glorious majesty’. The trouble, though, is that we have become so comfortable with the homely image of the baby, we need several weeks to remind us that his coming is a challenge to much that we hold dear.
John cautions his hearers against spiritual complacency – “Do not presume to say to yourselves, `We have Abraham as our ancestor'; for I tell you, God is able from these stones to raise up children to Abraham”. As Christmas approaches, this message is apposite for us too. God doesn’t need us; we need God.
Posted by Christ Church Morningside at 12:19 PM No comments:

St Andrew was one of the disciples expressly called by Jesus. The Gospel for his feast day is brief, and recounts his call. Little else is known of him, but this is distinction enough. A fisherman like Peter, he appears in just a few Gospel episodes, and does not seem to have been one of the 'inner circle' of disciples -- Peter, John and James. Yet the image of the simple peasant fisherman, who, despite his lack of education, could recognize the extraordinary presence of Jesus, has commanded respect and veneration in countless times and places. Here is someone with whom the least ambitious of Christians can identify.His is a role that any of us can be called to fulfill. In the Epistle set for his feast day Paul says "How are they [the mass of humanity] to call on one in whom they have not believed? And how are they to believe in one of whom they have never heard? And how are they to hear without someone to proclaim him?" The message is simple. People can't know about Jesus until someone tells them. Furthermore, those who are ignorant might include our nearest and dearest. Andrew stands out because he was instrumental in the call his own brother. Ever since, he has represented the humble folks who lead people more charismatic and energetic than themselves to the service of Christ. In this way he offers us a suitably modest Christian ambition -- to be mere conveyors of the message of salvation in Christ, yet conveying it in the expectation, and the hope, that those to whom we carry it will make a far bigger impact than we ourselves ever could. Such is the satisfaction of belonging to something vastly greater than ourselves -- 'the communion of saints'.

St Andrew is the patron saint of both Scotland and Russia. In their radically different ways, the religious traditions of these two countries -- Calvinism and Eastern Orthodoxy -- show how evangelism can take quite different forms and yet to equally powerful effect.
Posted by Christ Church Morningside at 9:00 PM 1 comment: 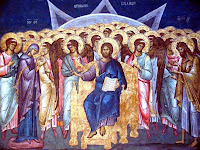 On Advent Sunday we begin a new cycle of readings. This year the Gospel passages (for the most part) come from Matthew rather than Luke, from which they were taken over the course of last year. But on Advent Sunday itself, the change is not so very significant. Whatever the year, this week’s readings are always powerfully apocalyptic – all about the end of time and the final judgment.
The modern world, I guess, has greater difficulty in believing in an apocalyptic end to time than people had in centuries past, and ‘adventism’ is generally regarded as somewhat extreme by the members of mainline churches Yet, there they are – readings from OUR Bible, appointed to be read this Sunday by OUR lectionary. So what should we think about them? How are they best understood?
The first point to emphasize is that, despite the frequency with which people have tried to predict ‘the end of time’, in Matthew’s Gospel Jesus is quite clear -- “about that day and hour no one knows, neither the angels of heaven, nor the Son, but only the Father”. In other words, all this will happen in God’s time, not ours. Secondly, ‘if the owner of the house had known in what part of the night the thief was coming, he would have stayed awake and would not have let his house be broken into’. Each of us has our own ‘end of time’ – the hour of our death. It does not matter when God brings the whole of history to a close if we have met the end of own lives unprepared.
Suppose with the inevitability of death in mind, we take the message of Advent to heart? What then are we to do by way of preparation? The Epistle for this week has the answer ‘You know what time it is now, how it is the moment for you to wake from sleep. Let us then lay aside the works of darkness and put on the armor of light; let us live honorably as in the day’. The passage from Isaiah puts it even more simply ‘Come, let us walk in the light of the LORD!’ The ‘moment’ to make this choice is now.
Posted by Christ Church Morningside at 8:30 AM No comments: