It is hard to avoid the sense that this week’s combination of readings – whether in the continuous track or the thematic track – are somewhat random. Both the Old Testament lessons are about women in need of protection and support who have to make striking accommodations with the world in which they live. The Epistle continues the Hebrews theme of Christ’s priesthood, while the Gospel from Mark recounts the episode known as ‘the widow’s mite’. This is the occasion when Jesus praises a widow woman who has given a tiny sum of money to the synagogue in preference to the wealthy people he had seen give far larger sums.
All of these are interesting passages, and in three of them women figure notably. But it is hard to find any one 'message' around which they seem to coalesce.
There is, however, an obvious lesson we can draw from the brief Gospel episode. Generosity is relative to the resources of the giver. This obvious truth makes it odd that human beings should be so impressed by ‘big bucks’. We always hear about huge philanthropic gifts – from Carnegie, Rockefeller, Bill Gates and so on – and even though we know that these have cost them very little, if anything, by way of personal sacrifice, we’re still impressed. In sharp contrast, we don’t hear much about small philanthropic gestures that constitute a real sacrifice on the part of the givers, who for the sake of something, or someone, other than themselves, have forgone things they wanted, or even needed. It is the size of a gift that always captures the headlines. And yet this never measures its generosity. 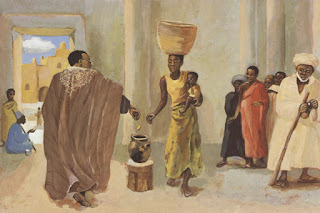 However obvious this truth may be, it is worth repeating again and again.Yet it does not take us to the heart of the Gospel message. This impoverished woman is giving the treasury of the Temple in Jerusalem all that she has to live on. Her tiny ‘mite’ demonstrates the personal depths to which faith in God can go far more powerfully than the ‘showy’ religion on which Jesus comments in the preceding verses. At the same, there is no denying that it is the hypocrites he condemns who get worldly acclaim, while the poor widow remains in her poverty. In this way her case presented Jesus’ hearer, with a real counter-cultural challenge. And so it does for us and our world also. Which, in all honesty, do we prefer – the kind of success that contemporary society undoubtedly favors (and which, sometimes, conventional church going can help along), or the spiritual sincerity and simplicity that brings us closer to God?
picture: MAFA Widows Mite
Posted by Christ Church Morningside at 3:17 PM